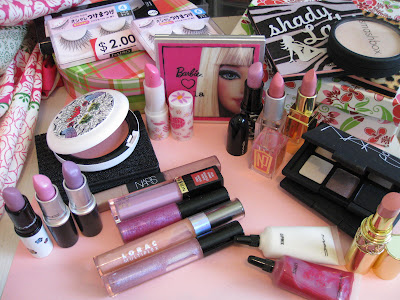 Hey everyone! This is the longest I've gone without blogging in a really long time. I was sick earlier this week but work and school have drained me so I haven't had much free time lately -all my free time has been dedicated to sleeping! =O I have tons of reviews to work on.. and when I say "tons", I really do mean TONS. I've taken photos of most items but haven't had time to swatch or write. I do have a few reviews that are "ready" but need to be put together (editing, sorting, etc.)..

Anyways, what should I do? Quick reviews (meaning less photos and descriptions)? Keep to the same reviews (in depth reviews and lots of photos)? Just swatches? If I'm keeping to the same reviews, there won't be as many posts but if I do swatches or quick reviews, I'll be able to post more often. What do you think? I just have like three bags full of makeup that I haven't even touched yet which is why I told my boyfriend the other day that I absolutely do not want any new makeup right now.

Also, I can't believe that Valentine's Day is right around the corner. I meant to do a giveaway but I've really been so, so busy and haven't had much time to sort things out. I'm still sticking with the pink and red theme but I guess I'll be shifting it to a Spring Giveaway instead -just don't think I've forgotten. =\

I need to finish up a few things this weekend before I jump back into blogging but I'm going to do my best to try to put out regular reviews again. How have you all been? What kind of posts would you like to see? Let me know in the comments! Have a great weekend.
Posted by kali at 7:36 PM