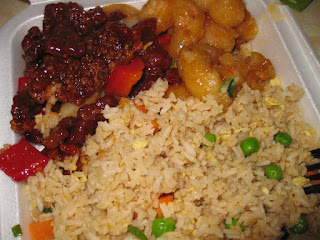 I've been having the strangest cravings since last night. I fell asleep wanting nothing more than fake Chinese food and cheese and crackers and woke up yearning for the same. So for lunch today, off to Panda Express it was!

I ordered the fried rice, Beijing Beef, and Honey Walnut Shrimp. I'm actually mildly allergic to shrimp though. I get hives about 85% of the time, but if I really like the shrimp, I'll eat it anyways. But a few hours later, I have to pay for it with nasty hives and severe itching. 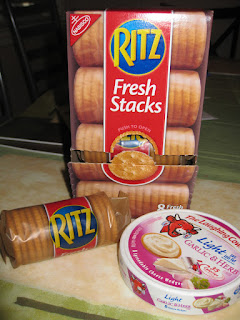 I also stopped by the store to pick up some cheese and crackers. They were delicious. =P
I've been gone for a while now so I thought I'd give you all a brief update. I'm currently on Spring Break but it hasn't been much of a break whatsoever. I've just been stressing a lot lately. It's all been a mixture of school, life decisions, and a car accident I was involved in last week.
Ok, before anyone says, "Of course, she's Asian.. DUH she was in an accident.."
It wasn't my fault! Some guy rear ended me while I was stopped at a light. Oh well, this kind of thing happens. It just sucks because he clipped a good chunk of my car. It's all taped up and incredibly ghetto looking now. Tomorrow I'm going to see the adjuster to see if they're going to repair it or total it out. I don't want a new car. My car runs perfectly fine so I hope they fix it.
It doesn't help that my back has been hurting like crazy. I have to go to the doctor 2-3 times a week for the next 2 months or so and that's really been taking up my time.. and gas! (How much is your gas btw? Just curious. Over here, it's about $4.05!)
Anyways, take care. I'll be back (regularly) soon. I just have a few things to take care of. I've been working on reviews but editing is so much work! Also, I know that you all recommended that I wait for the giveaway but after looking at all the goodies I plan to give away, I think I have more than enough. We'll see how everything works out though.
Hope you're all doing well. =)
Posted by kali at 3:37 PM