Happy Saturday, Quick Sephora Haul, and 10% Off at Sephora!! 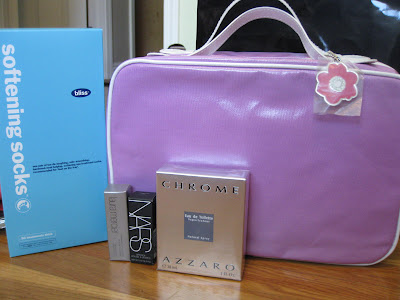 I just wanted to do a little post for the "gift hauling" I did at Sephora yesterday. I only bought one thing for myself (and it was on sale!).. the rest was for all these upcoming events. My Mom's birthday happens to be just a few days before Mother's Day (so that's 2 gifts.) Then I have my God Mother's present (1 gift.) And THEN after that is my Dad's birthday on June 14th and then 6 days later is Father's Day!! So yea, it's pretty hard getting 5 different gifts when you're broke.. *sigh. It took be forever to find presents since everything was pretty much out of stock (probably because of the 15% off sale that ended last week.) Was major disappointed because I could've saved almost $30 if I had just bought everything last week.. but the bf didn't want to go!! =( That could've been a Givenchy or Dior lipstick right there.
Anyways, here's what I got:
1. Bliss Softening Socks- $48 (Pretty darn expensive but you get 50 uses.. I feel it's kind of weird to re-use over and over though- Mom's Mother's Day present)
2. NARS Lipstick in "Afghan Red"- $24 (Will add this with a CARGO palette I bought for my mom's birthday to make it a nice little set.)
3. Laura Mercier Shimmer Lip Colour in "Plum Wine" (God Mother's Mother's Day present)
4. Azzaro "Chrome" Eau de Toliette Spray- $35 (Dad's Birthday present)
5. Sephora Brand "Poppy" Makeup Bag in "Purple" -$20 (For myself!!)
So I still need another thing to add to my God Mother's Mother's Day present and then another gift for my Dad for Father's Day. Ughh.. It's really hard finding presents for them.
Ok so then today I was having a really bad day and feeling all down and out and I wanted to buy myself something as a little pick me up. The only thing is I didn't want to spend any "real" money so I used the rest of my Sephora gift card. I was also feeling bad that I missed out on the 15% off last week at Sephora so I skimmed RetailMeNot for some good deals and promos. Nothing caught my eye. I saw that someone had recently put up the 10% off discount (which you can use for your first V.I.B. purchase of the year.) I already used the code a few months ago but decided to try it anyways and guess what, it worked!!!!! Omgosh I was so excited.
Here's the code:V227BL
I can't guarantee it will work for you but it did for me and I already used it back in like February (and supposedly you can only use it once per V.I.B. account AND it expired too a few months ago.) Not sure why it worked today but gotta love them computer glitches right?? I'd give it a try.
And another thing.. this is so weird but I ended up having to only spend $1.20 out of pocket (after the gift card was used.) Lucky me! Anyways, I put in my boyfriend's address -he lives in another city by mine (less than hour away) and for some reason using his address, the total (after gift card) was only 50 cents! And the thing is, we both live in California but the tax comes out different for some reason. I still ended up using my address though since I wanted it ASAP and didn't want to wait to go to his house after it was delivered. So....... I'm just wondering if that happens to anyone else.
Have a nice Saturday night. Have to go study now. =(
P.S. Will do review on MAC Paint Pots soon.. hopefully by tomorrow. Went to MAC the other day and swatched all of them! ..And forgot to take pictures of Pret-A-Papier swatches. =P But honestly, none of it interested me when I swatched -I wanted Instant Chic blush but in store, it looked powdery and un-promising.
Posted by kali at 9:29 PM