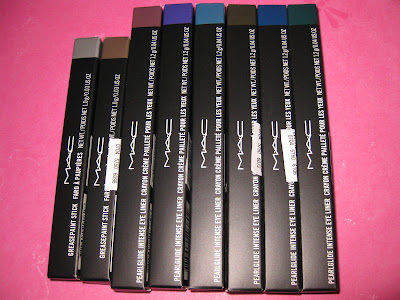 I never purchased greasepaint sticks ($17.50) from previous MAC collections and wasn't sure abou buying any from Art Supplies due to the mixed reviews. I've heard some rave reviews about GPSs (greasepaint sticks) while others totally hated them. I went ahread and picked up 2 in "Zinc Zone" and "Dirty" because the colors looked gorgeous online. I also definitely wanted to see what all the hype was about. Here's my take on MAC's GPSs..
The Packaging: Greasepaint Sticks come in a black plastic applicator (with matching black caps.) Think automatic eyeliners -they're like those but fatter. You twist up the stick to get the product out. There's also a "band" at the end up the "stick" or pen to show you what color's inside. Also, make sure you don't close the cap "on" the tip of the product. I did this while in a hurry and some broke off! 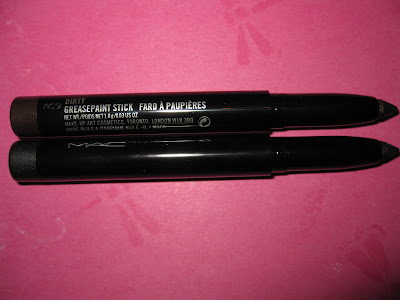 The Product: First off, I have to warn you that these are very fragile. When swatching Dirty, I applied a wee bit too much pressure and part of the tip broke off (happened when I closed the cap on it too!) Greasepaint Sticks can be used as both a liner or a base or an eyeshadow I suppose but I used them only as a base (for eyeshadow) and liner. Both were slightly different in texture (Zinc Zone tugged more while Dirty felt a tad smoother) but overall, these did tug and they weren't the easiest products to work with (for me.) An issue for both was that they were so incredibly budge proof that if I messed up, I had to use makeup remover since it wouldn't just easily come off. Also, it was difficult to smudge out so be aware that these do have great staying power. They're also very bulky -even if they're sharpened they're so fragile that they get all "stubby" after just swatching. Also as for creasing, these didn't crease on me (no primer) but I do have incredibly dry eyelids and most products don't crease on me anyways. I also heard that the past GPSs had a funny smell and these do smell waxy to be -but it's not overly strong or anything (can't smell it when wearing it on my eyes.) I'm going to write a little more on my experience with each color separately as I did feel they worked a tiny bit differently.
1. Zinc Zone- The color is so pretty but I feel like it really tugged at my lashline/lid. It just looked flaky on my lashine (see photos underneath.) It seriously looks awful. I tried smudging out the line (since it looked so flaky) but it didn't really look great either. You know, it really could just be me and that I'm applying this all wrong but I just didn't have a good experience with it. My eyes looked messy and flaky -didn't help that the mascara I used that day was a clumpy mess either. Now as a base, I have to say that this was gorgeous. It gave my eyeshadow a dark-metallicy hue and I really liked that. But again, when I applied it to my eyelids -it tugged and was uncomfortable. I ended up just "marking" some areas on my lid and then smudging the color out with my finger. Afterwards, I applied the eyeshadow on top.
2. Dirty- I have to say that Dirty actually seemed slightly smoother and didn't tug at my eye as much when compared to Zinc Zone. I tried this on my lashline as well and it seemed to go on just a bit smoother -but I still don't like it for lining. I also tried it as a base on my lid (with no eyeshadow) and had the same experience as I did with Zinc Zone as a base -it tugged (only very slightly less.) Not sure what it looks like with eyeshadow on top but I think it'll be really nice. (Sorry, would show swatches with eyeshadow on top but left Dirty at my boyfriend's house.)
So now that I've explained all that, I have to say that I do not like these for lining and this absolutely will not work (for me) for tightlining as it's too bulky and flaky. I've heard people using this for smudgy liner looks but I thought it was too flaky to smudge out (again, this could just be me.) As a base, I think these are pretty good. However it was uncomfortable that it tugged on my eyes but they do hold up well and have great staying power. The colors are gorgeous and metallic-y so they'll look pretty darn amazing under eyeshadows.
I also felt that since I'd be using these as only a base, I could definitely find other cheaper alternatives for that purposes instead of shelling out $17.50 for each of these. I thought about using NYX Jumbo Eyeshadow Pencils (only $3 on CherryCulture) instead of these since they do come in a wide variety of colors. I asked Christine from Temptalia about using NYX pencils instead of GPSs and she mentioned that the colors are very different -and I agree. I absolutely love the metallic-y shades of the GPSs from Art Supplies but because I really don't love the product, I don't want to shell out $17.50 on them when there are most likely alternatives from other brands. Something I have to mention though is today I wore NYX Jumbo Pencil (no primer) and it kind of went all over the place. I would definitely use that with a primer if you want to use it instead of the GPS. The GPS is pretty much budge proof and lasts for hours once applied -unlike NYX Jumbo Pencils which will wear off (if used without primer.) I'm thinking that NYX "Pots and Pans" may be comparable to Zinc Zone as they're both silvery -Zinc Zone appears to be darker though.
The Color:
1. Dirty- Taupey brown with multicolor shimmer.
2. Zinc Zone- Darkened gunmetal silver with blackish shimmer.
Swatches.. 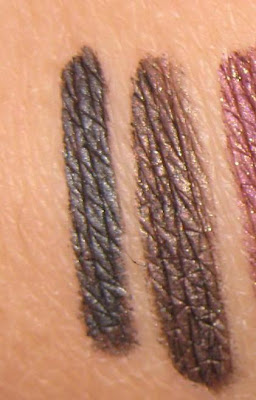 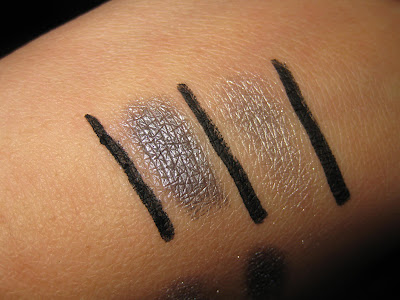 From left (with flash): Zinc Zone as base with lighter side of NARS Underworld Duo on top, lighter side of NARS Underworld Duo by itself.
Eye Swatches..
Here is Zinc Zone slightly smudged out. This is about 6 hours after I firsted applied it. I had to attempt to smudge it out since it was so flaky looking when I just lined my eyes with it. It was difficult to smudge out since it's so budge proof though. Sorry for clumpy-ish lashes. Really, really hate this look. 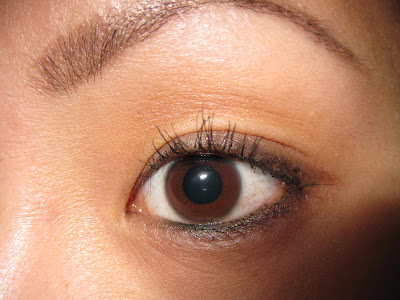 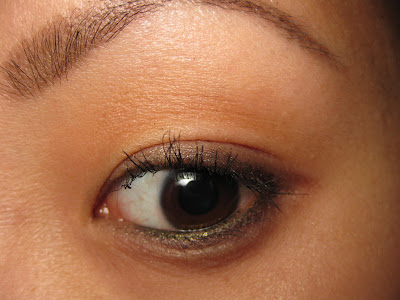 Overall: I'm returning both Greasepaint Sticks. No point in keeping something I'm not too fond of. I have to admit that the colors are amazing and I really love Zinc Zone under NARS Underworld as a base but there are too many things I don't like about these. They're way too fragile, flaky, and really tug at my skin. I'd only be using these as a base if I kept them but I think I can find other silvery and taupey bases out there that will work better/possibly be cheaper. In all honestly, I'm just really not loving these. Again though, I've heard so many people rave about Greasepaint Sticks so if you're interested, I'd say give them a try. They're limited edition so they might not be available if you want them a few months from now (sure to come back with other collections though.. but with different colors.) Maybe I'm just too picky?? These are just not cutting it on my list but if you're interested and like metallic-y shades you should really give them a try.
P.S. I meant to do this review awhile ago but never had time. Sorry the post was sooooo long. I just had a ton to say about these and I really hope this helps someone out.
Posted by kali at 4:00 PM