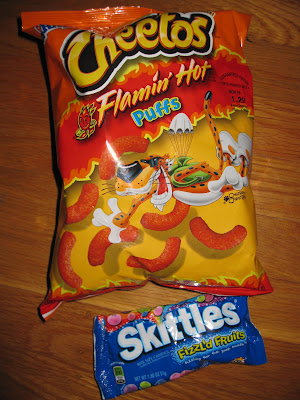 Flamin' Hot Cheetos Puffs- My favorite Hot Cheetos and Cheeto Puffs put in one.. this is delicious. It's the ultimate snack for when you have the munchies.
Skittles Fizzl'd Fruits- OMGoodness.. I tried this on Halloween and was in Heaven. To me, these are like skittles coated in teeny tiny pop rocks.
And onto the Giants.. we won yesterday! Honestly I'm not a huge baseball fan but I do support them since I'm from the area. I've been to/watched a few games but I just am not a baseball lover -the game's too slow for me and I always end up falling asleep!! I can watch it live (it's a little better) but it's really not my thing -I'm a lot more into basketball. I don't know.. maybe I'll get into it next season -my boyfriend's really into it and sometimes I feel bad that I can't watch it with him.
Something I noticed though is that 9/10 people are just jumping on the bandwagon which sort of irritates me. For instance, people who've hated SF all their lives are now all, "Oh I loveeeee the Giants!! I always have!" Smh.. such BS. Then there are the people who have never even watched a game in their life -they're rocking Giants gear from head to toe and I just think it's WEIRD. People got to like what they like and not just jump on the wagon because "everybody's doing it." So now SF has like 10,000 fake fans -oh well, Lakers are worse. Half their fans aren't even true fans -they're bandwagoners. You're either a Laker lover, Laker hater (me), or Laker bandwagoner. =P
Also, my little brother's suddenly really interested in baseball -he especially loves the Giants. He just started Catholic school this year and our priest was a huge Giants fan (he recently passed) so the whole school is all about the Giants. Now, he'll only get things in Giants colors!! Like today when we went on a walk to get a Slurpee.. 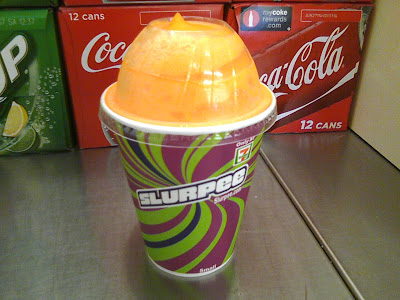 On another note, I'm sad because I'm in class and missing the Miami/Minnesota game right now!! I have Yahoo Sports pulled up to keep track of the score but can't find anywhere to stream the game. =( I'm pulling for Miami! Hopefully they win by the time I'm home -they've been up the whole game so I have hope. We got this!!!! =)

P.S. Blah.. Miami's got a gazillion bandwagoner fans now too.