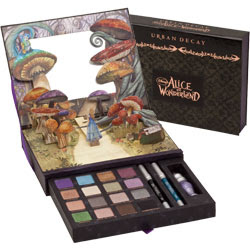 I wanted to do a little segment for those who have been lemming for the Urban Decay "Alice in Wonderland" Book of Shadows. I've answered lots of YahooAnswers questions on this -and have helped several people find these palettes so I wanted to share this with anyone who happens to pass through my blog. Here's a little list of ways you can get the Alice Book of Shadows before you resort to paying a high price on Ebay. They seem so simple, but I really hope it can help someone. Anyways, here we go!
Ways to get an Urban Decay "Alice in Wonderland" Book of Shadows..
1. Check the Urban Decay website on a daily basis. The Alice in Wonderland Book of Shadows came out on January 15 and immediately sold out on the first day. Since then, everytime you visit the product page for the Alice palette, a little message appears saying, "You missed Alice, check back, etc." Sign up for the emails so that when it does come back, you can snatch up the palette. However, since January 15, it hasn't been available on the website. BUT, I do have a strong feeling it will come back because of this message. I think it'll come back really soon since the movie opens this Thursday March 05 so check back daily!! I really think it'll come back either a few days before the movie opens or on the date it opens.

2. Call Sephora stores. These palettes are sold out online at Sephora -so I doubt they'll come back to the website. Your best bet is to try the Sephora stores either in the boonies or the ones that don't get a lot of traffic. That's how I found both the Alice palettes I bought.

3. Call Sephora stores that you would never go to. Don't limit yourself to calling only Sephora stores within your area. Call stores even outside your city/state. If they happen to have it, you can pay through the phone and have them ship it to you.

4. Make friends with someone who works at your local Sephora. (Also applies to MAC, Ulta, or any of your other "usual" stores.) Lots of times, they can only hold an item for the day or 24hours but if you have friends there, they can hold if for you for longer. Also, through the years I've received so many free products and samples just because I've built a good relationship with the workers at the stores I frequent. If you're on their good side, they'll really try to help you.

5. Check Ulta stores. Ulta already sold out of these palettes but try calling Ulta stores. I'm not sure if Ulta will ship the products to your house but give it a try.

6. Check Macy's stores. Certain Macy's have Urban Decay counters so check to see which ones have them. When I call Macy's in January, the employee stated that the palette would be available in late February/early March -around the time the movie comes out. I would definitely try this. Call daily to see if they've gotten new shipment in and if they have it, put it on hold!

7. Call Macy's stores that aren't in your area. Call the ones that are less popular and they'll be more likely to have them -since less customers are looking for the Alice palette. The Macy's store will ship the item to your house -you just have to pay through the phone and shipping (which you would have to do anyways if you bought online.)

8. Last option -Ebay. Buy it sooner than later. If all else fails, I encourage you to buy from Ebay ASAP. Why? Because if you have not bought this palette by say, late March, I highly doubt the palette will ever come back. These palettes aren't being shipped anymore to Sephora or Ulta stores (so they only have what's already in stock) and are sold out online. If they're sold out on UrbanDecay.com forever, they're not coming back. That's it. So what happens with Ebay is that after March (or whenever these palettes will 100% never be available in stores anymore), it's not coming back.. EVER. That means that Ebay sellers will price this palette even higher. It also means that more people will be bidding (since they won't be available anywhere else anymore.) That means if you have to buy it on Ebay, I urge you to do it sonner than later.

Look what happens to all the limited edition MAC items. I wanted "Zandra" lipstick and didn't buy it at the MAC store. I passed on it lots of times on Ebay. Now, it's selling on Ebay from only one seller for $100. Ridiculous. So that's why if you have no other choice besides Ebay, buy it now and not later. "Now" doesn't mean "now" literally, I'd wait until after the movie comes out (after March) and it's a certain thing that these palettes are sold out everywhere.

Ok.. Sorry for the long, wordy post. There's a lot of info in here though. There are LOTS of ways to still get an Urban Decay "Alice In Wonderland" Book of Shadows without dropping too much cash. Hope this information helps someone.

P.S. I wrote this a few days before the movie came out so that's why it might sound old (because the movie's already out!!)
Posted by kali at 3:16 PM