Yesterday I attended this special Lancome event with my friend Nancy. She signed us up for it a few weeks ago and I agreed to tag along thinking it would just be some quick makeovers done by the Lancome "counter" girls. I didn't know it was a special event so I really wasn't excited. I have to say.. I went from "yea whatever let's get this thing done with" to "OMG that was the coolest thing ever!"
It turned out that Lancome's national artist, Jason Leong, was there so it was cool meeting him (above left.) I have to say that he was the best looking male makeup artist I have seen in my life -he was totally gorgeous. Perfect skin too and just a really nice guy. I think I might've blushed when he was touching up my makeup.
Tanee (above right) did most of my makeup. She was AWESOME. It turns out she and I are from the same area and her cousin's Jamal Crawford. At first, it didn't register. She was like, you know, Atlanta Hawks -got traded from Golden State last year. And then all these questions just started spilling out.. She's met guys like Dwight Howard and a whole long list of other players -she basically said, "I've met pretty much every player except for Michael Jordan." I can't even put into words how blown away I was by all this.. oh and on top of it, she said Dwight's "a nice guy who keeps to himself." I like when athletes are nice people. =) It makes me like them 100 times more. 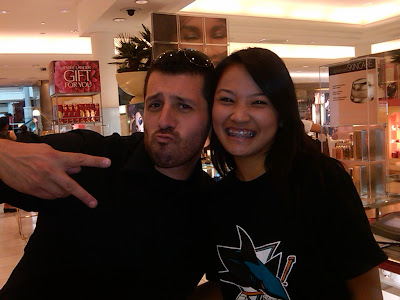 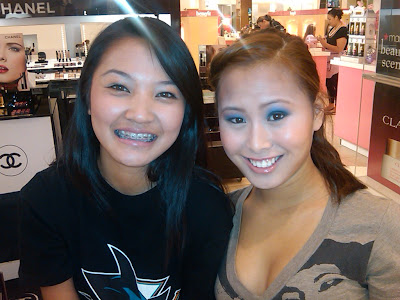 Nancy & Me
The Look.. To prep my skin, Tanee removed my makeup, put some cleanser on, and used a bunch of different lotions and potions. She asked me what I wanted for my look and I told her to have fun and do whatever she wanted -I thought it was about time I step around of the safety net of my boring neutral.

She didn't use a primer and instead used a concealer -which I think resulted in immediate creasing. She opted for the concealer because my skin was having a really rough, dry day. Afterwards, she used a dark black-blue pencil (Blue Lapis I believe) as a base all over my lid and past my crease. She added sparkly black eyeshadow to my lid and applied violet eyeshadow on my crease and above. She also added mascara on my top and bottom lashes.
For the my face, she applied some foundation and blush and gave me a nude-ish lip since my eyes were so dramatic. Jason stepped in and added 2 types of highlighters to (above) my cheekbones, above my brows, and my nose. (If you want the full list of products, just ask and I'll type it up. Too lazy and sleepy right now.. Sorry!!) Here's the end result: 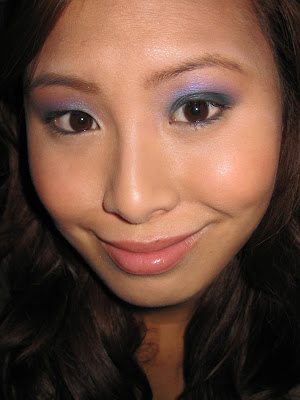 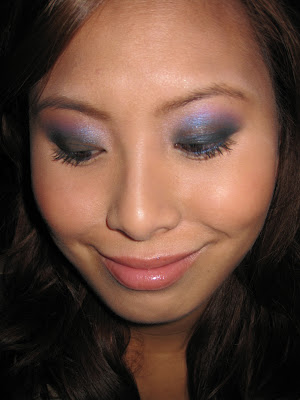 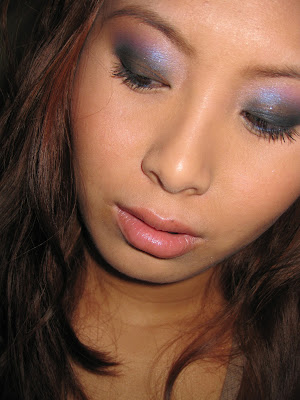 See the creasing? (This happened just 1 hour later.) Overall, I think Tanee did an amazing job. However, next time, I'm always going to make sure I get a primer in there no matter what. 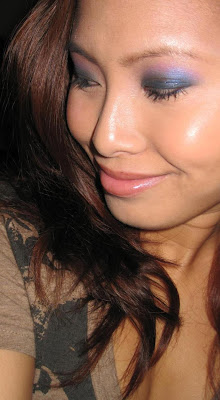 ﻿Tanee's from The Bay and does freelance work as well. I really do recommend her. She's talented, has a great personality, and gives off good "energy" -something that's always a must. She is so friendly and is one of those people that you could just chat with for hours -we got in so much girl gossip during the 1.5 hour appointment. If you're ever in The Bay and you'd like to contact her or book an appointment, shoot her an email at tanee.mcintosh@gmail.com. You can also contact her through her mother's website (she does floral arrangements and things like that for weddings, parties, etc.) on sisterswithclass.com.
Posted by kali at 11:32 AM