Qur'an Burning Cancelled.. And Then Reconsidered? 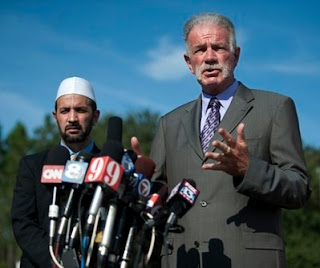 I wrote a post earlier today that focused on Terry Jones and his plan to burn copies of the Qur'an on 9/11. I later updated that he had (today) decided to drop it which had be relieved BUT, I didn't fully believe him. The reason I didn't 100% take his word for it when he said that he was cancelling the Qu'ran Burning was because I don't trust him -he didn't seem sincere. And I guess I was right. It looks like now, just about an hour after my last update, the stupid Terry Jones went from cancelling Qur'an Burning day to reconsidering it because "HE was lied to." What bullshit. He's saying that he was told that the site of the new Mosque would be moved (but I don't believe that was ever guaranteed) so that was the reason that he backed out of his plan. I personally don't believe he was ever told that the Mosque would (definitely) be moved but who knows, I could be wrong -I wasn't there.

Anyways, I just don't get what this guy is trying to prove by burning something so sacred to so many people. Nothing but outrage will extend from this. Evil only fuels more evil.. He's really willing to disrupt any peace we may have and put our troops in danger for his little stunt? This guy is a complete idiot. He needs to just shut up, keep his hands off the Qur'an, and go and read his own bible. Maybe he'll learn a lesson or 2 about kindness and morality -qualities he obviously does not have.