Miss USA 2010: A Bunch of Hypocrites. Controversy Yet Again!!

I recently stumbled over some interesting articles (here and here) on this year's Miss USA 2010. So remember Carrie Prejean -the former Miss USA 2009 winner? After the whole controversey with the same-sex marriage question, there was a "partially nude" photo of her making its rounds online. The picture featured her in her undies with her bare back turned to the camera. Nothing was shown except for her back and butt -which was covered but still she was in even more hot water for that one "racy" photo! Anyways, her contract was later terminated due to "continued breach of contract issues." I don't care about Carrie Prejean or her Miss USA controversies but this bothered me.. 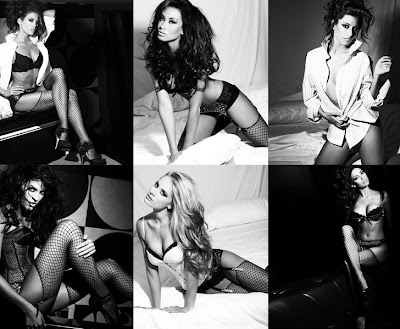 Lovely ladies in pretty lingerie and seductive poses. Looks like a new ad campaign for Victoria's Secret right? WRONG. These are the new Miss USA 2010 photos directly from the Miss USA organization themselves. They had all of this year's contestants take photos in this nature during a shoot called, "Waking Up In Vegas" for this year's "contestant page" photos. So now I'm wondering, "What the heck??! How does Carrie Prejean get in trouble for her one "semi racy" photo and then the people over at Miss USA this year turn around and have all 51 contestants go take photos like these? What freaking hypocrites." It's really stupid that they go and give Carrie a bunch of hell for her one photo (P.S. they later found a video too though!!) and then they go and shell out 51 just as racy photos of the new contestants.
Another thing that bothers me is like always, the media has once again turned to sex to help promote whatever they're promoting -this time it's the pageant. The whole beauty pageant thing is supposed to be about beauty, brains, and "good clean fun" for people of all ages. Yea right. I don't want my little brother/sister/cousins seeing this stuff.
I have a strong feeling that a lot of these girls are going to regret their photos. Sure they all hopped on the wagon (I read that a few were really nervous prior to taking the photos) and took the pictures but I feel as though they "had no choice." If any girls opted out of taking the photos, it would've been a huge disadvantage to them and they most likely wouldn't of had any chance of winning the crown.
Anyways, really gorgeous photos actually. I just think it's inappropriate for the pageant and for the fact that they critcized Carrie so much about her photo and turned around to do the exact same thing. To see photos of all the contestants from the "Waking Up In Vegas" shoot, click here.
What do you think of these photos? What do you think about Miss USA's decision to make the girls to do such a provocative shoot?

P.S. This post is only about Carrie's picture and these pictures of the new contestants. It has nothing to do with Carrie's answer or thoughts on same-sex marriage. This blog is a "drama free" environment and everybody is entitled to their own opinions.

*I got all the photos for my collage from the Fox News link I posted.
Posted by kali at 6:10 PM