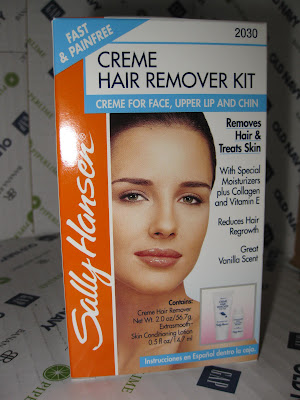 Before my bestfriend Rose moved away, she used to always do my moustache for me (hey, everybody has at least a little 'stache whether you want to deny or not!!) She's Persian so she knew how to thread eyebrows, mustaches, etc. She had the biggest girl mustache ever! Oh man, we were always running late going to places because she always had to thread her 'stache.
They have a bunch of those "threading" carts in the mall now. Threading is basically another way to remove hair but instead they use a thread to pull out the hair. It's actually really effective and gets the hair out from the root just like tweezing or waxing. Many people also assume that it hurts. It doesn't! I like it way more than tweezing because it's faster and you get a whole bunch of hairs out at once whereas with tweezing, you only get one at a time.) Anyways, once she moved away I had to turn to a new method to get rid of my 'stache. She tried to teach me how thread but sadly I never got the hang of it. =(
I now use Sally Hansen's Creme Hair Remover Kit (for face.) I think it's only around $5.99 (plus I always use a coupon) so it's pretty cheap. One tube lasts me months too (I think half a year! I really can't remember. I don't have to get buy a new tube often though.) Anyways, here's what you get in the kit: 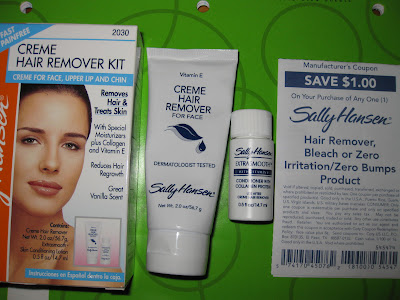 Creme Hair Remover, Extrasmooth Skin Conditioning Lotion, $1 off Coupon.
The Product:
1. Creme Hair Remover- This is a chemical depilatory so it basically breaks down the hair at the surface so that the hair disintegrates. This doesn't completely get rid of the entire hair from root to tip like waxing or tweezing would, it only gets rid of the hair from the surface of the skin to the tip (therefore the hair does grow back quicker.)
So how do I like it? It does the job. I spread the cream all over my upper lip area and leave it on for 6 1/2 minutes. The recommended time is 3 minutes (minimum) to 8 minutes (maximum.) Once the time's up, I take either a cloth or a paper towel (fold it so that it's thicker) and put a bit of warm water on it (not hot water.) Then I just rub off all the cream. After that, the hair's all gone!
What I don't like about it? Well the smell's awful. The box says there's a "great vanilla scent" but it's more of a synthetic gross scent trying to be vanilla. I just don't breathe through my nose when doing this so I guess it's ok. Another thing is that if you leave it on too long (for me "too long" is about 7 1/2 minutes or more), it's burn your skin. My skin gets really irritated -like it actually hurts if I leave it on too long. Also, my skin gets a little red and patchy in the area where I applied it and the redness doesn't go away for hours (sometimes it'll last nearly and entire day.) However, if I make sure to wash it off in time, everything's fine and there's no redness, patchiness, or irritation.
2. Extrasmooth Skin Conditioning Lotion- Once you wash the hair remover cream off, you apply this. It pretty much just soothes the skin. If you accidentally leave the remover cream on too long, this conditioning cream does help it a bit (for the irritation) but it doesn't take away the redness.
More Product Photos.. 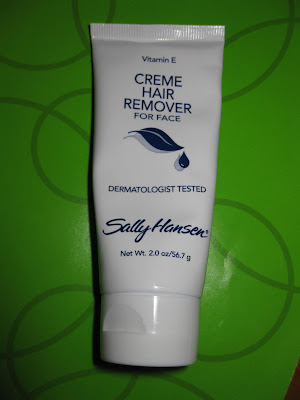 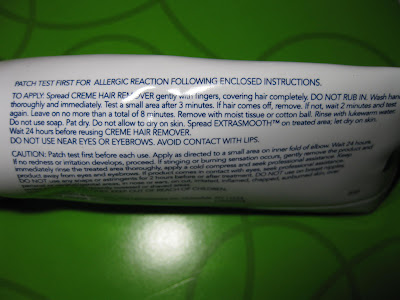 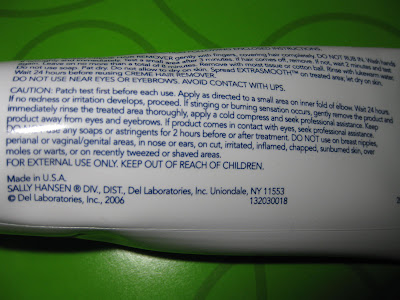 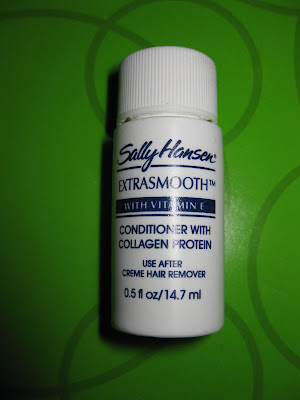 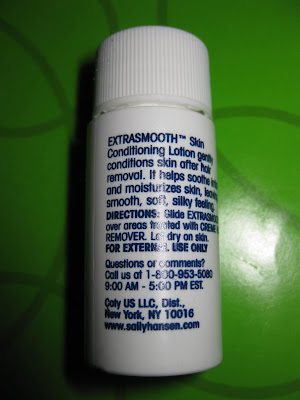 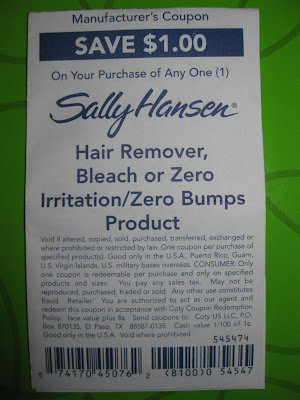 (I think most Sally Hansen skin products come with a coupon. I always save the coupon from the current box and use it on my purchase of the next box. Also great because it never expires.)
Overall: It does the job and I'll continue to use it until I can find a good waxing kit or learn how to thread. The only thing I don't like is that it only gets the "surface hairs" and doesn't get the hair by the root -which means that the hair will grow back faster and you have to do this more often. I don't mind too much though because mine isn't very noticeable and doesn't grow fast but I know other people might have a problem with that. I myself would prefer getting the hairs out at the root -just like waxing/tweezing your brows as opposed to say shaving them. Another thing that I have to again warn everyone about is NOT to leave it on too long or your skin will burn, become irritated, and turn red. It's not comfy and redness in your 'stache area definitely isn't a good look for anyone.
Me and Rose!! (Pics from highschool) 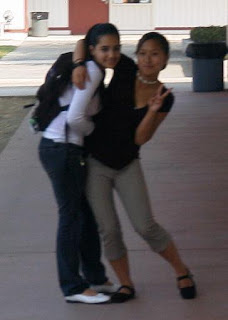 Here you can see how tall I actually am if anyone was wondering.. I'm barely 5' tall!! She's like half an inch taller. 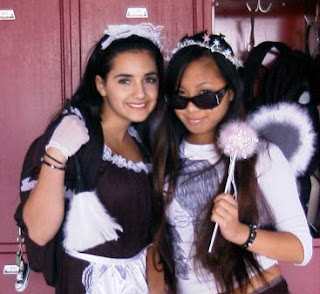 Geez Louissee my hair was long.. and dead.
Posted by kali at 2:14 PM