Holy Moly It Worked!! MAC Will Be Donating ALL Proceeds from MAC for Rodarte.. 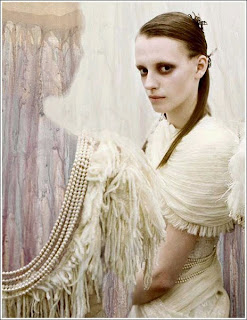 All the kicking, screaming, and being upset with MAC, passing the petition around, and angry phone calls and emails has finally paid off. MAC will no longer be donating $100,000.00 -they will be donating 100% of the proceeds from the MAC for Rodarte Collection to the Women and Girls of Juarez Initiative and I am so, so happy.
I am so amazed that "our" outrage actually caused MAC to change their minds. Because of all our voices, MAC decided to donate $100,000.00 -which they were not going to originally do. However, we continued voicing our concerns and now they're donating everything and I'm just again, truly amazed. We made a difference by joining together and we can continue to do so with anything. Sure I'm a little upset that MAC didn't even plan on donating a dime to the situation in Juarez but it is truly generous that they turned it around and are now donating all the proceeds.
Prior to the announcement that they'd be donating the $100,000, I wrote that I was weary of buying anything from the collection because it seemed so wrong. After the announcement, I still didn't want to because I wanted them to donate all of the proceeds. Now that MAC will be donating 100%, I feel that we should buy something, or a few things, from the collection. I along with most college students can't buy everything of course as we don't have the funds for it but I'm going to do my best. Just a reminder (for anyone who cannot buy anything from this collection at this time).. we can always help later too -through donations.
Again, I'd just like to thank MAC for turning around and becoming aware of the situation and for being so generous. I'd also like to thank God and the Virgin Mary. I've been praying to them since this whole thing exploded -asking that a change be made and that change has been made and I'm so thankful. I hear so often people saying that prayer doesn't work but it only doesn't work when you don't believe in your own prayers. It also takes time -nothing happens over night. Please, if you do pray (I'm not trying to offend people who don't), continue sending out your prayers to the people living in Juarez. I am so happy that they'll be receiving some much needed help.
Read On..
MEXICO CITY, México, July 29, 2010 – In response to public concern over the limited edition MAC Rodarte makeup collection, set to launch in fall 2010, MAC will donate all of its global profits from this collection to a newly created initiative to raise awareness and provide on-the-ground support to the women and girls in Juarez. MAC and Rodarte are deeply sorry that this makeup collection was so offensive to the people of Mexico and concerned global citizens.
This announcement follows a meeting last evening in Mexico City with MAC executives and Mexican government officials, including CONAVIM (Comisión Nacional Para Prevenir y Erradicar la Violencia Contra las Mujeres/National Commission to Prevent and Eradicate Violence Against Women.)
During the meeting, held at the Mexican Ministry of Foreign Affairs, this collective group committed to working together on the overall direction of the new initiative to help the women and girls of Juarez and to raise global awareness of their plight. MAC executives reiterated their deep regret and reinforced that it was never MAC’s or Rodarte’s intent to minimize the suffering of the women and girls of Ciudad Juarez.

In the coming weeks, MAC and Rodarte will be consulting with members of CONAVIM´s advisory board, as well as other local and global experts, to develop a comprehensive framework that provides grants to local and international organizations with a track record of improving the lives of the women and girls in Juarez.

“We are deeply sorry and apologize to everyone we offended, especially the victims, the women and girls of Juarez and their families. We have heard the response of concerned global citizens loud and clear and are doing our very best to right our wrong. The essence of MAC is to give back and care for the community and our initial handling of this makeup collection was not reflective of MAC’s values. MAC and Rodarte are committed to using these learnings to raise awareness on this important issue and to leverage our unique platform to help the women and girls of Juarez,” said MAC President John Demsey.

“Rodarte is committed to using creativity for positive social change. As designers, we strongly feel it is our responsibility to use ideas and actions for the good of our global community and are truly sorry for the offense we have caused. We are raising our voices in support of the strong women and girls of Juarez and joining others who are working internationally to improve their lives,” said Kate and Laura Mulleavy, designers of Rodarte.

Last week, MAC and Rodarte announced they would also be renaming the products and redesigning the marketing materials associated with the collection.