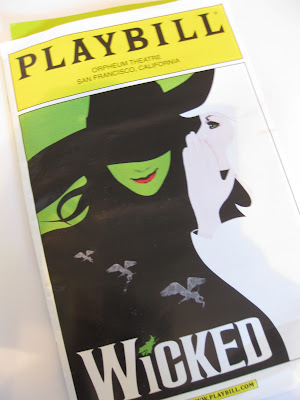 I went t see Wicked at the Orpheum in San Francisco yesterday afternoon and I loved it! If you live in the SF Bay Area/are traveling over here, go see it ASAP (the last show here is on September 5th this year.) I have to warn you that the tickets are a little pricey though but since we kept an eye on the site, we stumbled upon a promotion and got a little discount.
Anyways, onto the experience. I went with my mom, little sister, and little cousin. We were dressed very casually so when we got to the theater, I was a little surprised. I know people dress up for these shows and all but I didn't know we were supposed to be so fancy schmancy. Let me tell you, "dressing up" can come across as 2 totally different thing to different people. To some, "dressing up" means knee length dresses, tights, and pumps while to others, it means skin-tight dresses that just barely covery the booty, major boobage (spilling out), and 5 inch stilettos! Most of the men wore slacks or dark jeans and a nice shirt. 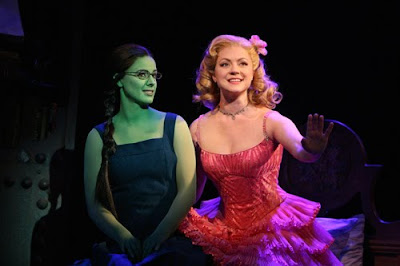 The show was I think about 2 hours and 45 minutes long (including a 15 minute intermission.) None of that time was draggy or boring -every single part of the show was spectacular. I wish I had taken photos but cameras aren't allowed. I'm going to take forever describing everything so let me just say that the cast was amazing, the musical numbers were wonderful, and the setting was spectacular. All the actors has so much talent -their voices were so powerful too. Everyone played their characters really well -I especially liked Elphaba (I think she was the best singer too.) Glinda was also wonderful -her character was so funny and incredibly ditzy.
Here's the one picture I got.. 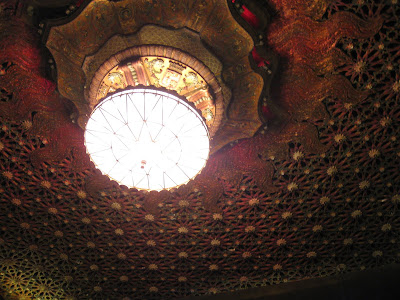 It's of the ceiling!! I took it during intermission when the show wasn't even on and I still got in trouble!!!!
Great Show, But Uncomfy Seating..
If I had to complain about 1 thing, it would be the tight seating (We were on the 2nd level -there were 3 levels I think.) The seats were way more condensed and smaller than say ..movie theater seats -it almost felt as though the audience was riding coach on an airplane. The guy behind me was a pain in the butt but I guess it's not totally his fault that he's so tall and big. Basically, you know when guys cross their legs (not all the way) and so their foot is hanging off the opposite knee?? Well that foot nearly hit my head and I nearly hit that foot about 20+ times -even after I asked him to move his foot and gave him dirty looks. Seriously, imagine turning to the right and having the BOTTOM of someone's shoe AN INCH FROM YOUR FACE.
P.S. Here are some cool pics -a few SF landmarks were turned "green" in honor of Wicked.
China First Restaurant
336 Clement St., San Francisco, CA.
I don't normally do restaurant reviews (I think I'll start) but I also wanted to tell you about the little restaurant we ate at before heading off to the show. My mom had heard rave reviews from a bunch of people about this place in the city called "China First Restaurant." She told me it had a 4 star rating on Yelp (when I got home it turned out it was only rated 3.5 stars) so I had some high hopes.
When we got inside, we were quickly seated/rushed to the table. The service was pretty terrible -waiting for napkins, drinks, etc. took forever but the food did come out quickly. Everytime we asked a waiter for something, we were either ignored and had to ask again, or the waiter(s) seemed like he/she didn't hear us as there was no eye contact ever. If they did hear us, they'd bring us whatever we needed after a long wait.

What about the food? Definitely not the best Chinese I've ever tasted. Everything was either drenched in oil or salt -the fried chicken in particular was so salty that everything I put on my plate afterwards ended up super salty too. However, prices were dirt cheap -especially compared to other restaurants in SF. Overall, I'd rate the place and its food 3 out of 5 stars. I don't see myself going back unless I was super broke, in the area, and wanted some Chinese.

2nd pic source
(All other pictures belong to me)
Posted by kali at 6:46 PM