My MAC In The Groove Experience, My Trip to Great America, & LeBron James goes to Miami! 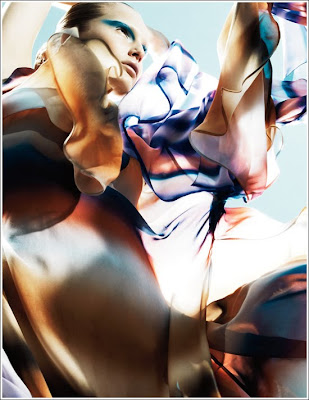 So I'm sure all of you know that In The Groove (check collection info here) was released yesterday (August 8th.) I was supposed to be getting 2 Stereo Rose MSFs -that was the only thing I wanted from the collection. I hadn't seen Stereo Rose in person and knew I wouldn't be able to make it to MAC the day of so I pre-saled 2 of them "just in case" I ended up falling in love with it. I pre-saled with a Nordstroms counter that I don't normally pre-sale with because it was closer to wear I live and I figured "what's the harm? Right??" Anyways, I did the pre-sale about a week in advance and was informed that I was at the top of the list and would definitely be getting my 2 Stereo Roses.
The day that collection launched, I kept getting this funny feeling and I wanted to make sure I definitely had it. (Because of all the hype, the could easily "misplace it.") When I checked online to see if it had been charged to my account, the charge wasn't there and I started freaking out (when you do pre-sales, the order usually gets charged to you in the morning.) I quickly dialed the MAC counter and the most rude, obnoxious girl picked up the phone. She told me that they didn't have the 2 Stereo Roses I ordered -which of course meant they'd sold it and somehow "overlooked" my way-in-advance pre-sale orders. Either they sold it or it was lost or misplaced -but I doubt they'd lose it.
I was really, really sad. I know people are saying, "Oh it's not that great and you don't need to have it!" but those are the people who have it! When you don't have it and hear those words, you feel worse. Honestly, it's not because I fell in love with Stereo Rose through online swatches -moreso because I had been on top of everything and placed the order in advance and had been at the top of the list. Something that really bugs me is that MAC didn't even have the decency to call and tell me they had sold the items that I bought in advance. Terrible service and Nordstroms is known for their great service.
I really wanted to swatch it for you guys so I'm sorry!! I'm never placing an order with this place again. My favorite MAC, the most responsible one, is the MAC Pro on Union Street in SF. Best employees, best artists. They're responsible, reliable, and don't push sales on you. I don't even feel like trusting counters anymore -I rather go directly through a MAC freestanding store as I feel like they're more reliable and professional. Click here for swatches of In The Groove.
Onto the Next Topic..
I went to Great America with my boyfriend 2 days ago! It was fun but pretty hot and my favorite ride is no longer running. Also, it wasn't as crowded as it used to be (like 5 years ago.) I didn't want to bring my camera because I didn't want to risk losing another camera so here's the 1 picture we got there with his phone.. 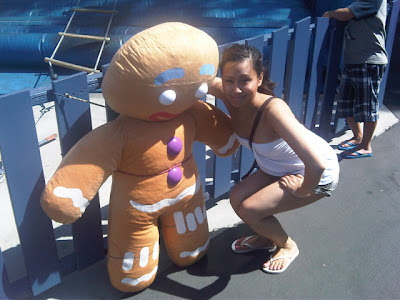 The Gingerbread Man from Shrek!! I actually took 3 but he said he liked this one best so he only sent me this one.. I think it looks awkward. I'm like really sticking my butt out for whatever reason! I kept trying to get to the height of the Gingie but it was hard. Oh and he won me a flag playing ball.. 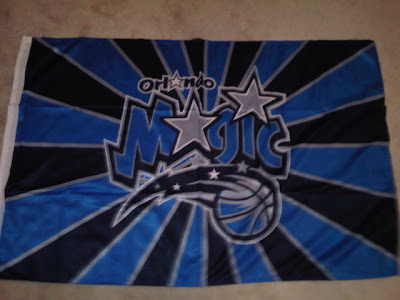 When he was choosing the flags, I actually screamed "HEATTTTTTTT!!!!!" (this was before Lebron made his choice) but I guess he didn't hear me. I saw him grab the Magic flag and since I like them anyways, I knodded.
And LeBron.. 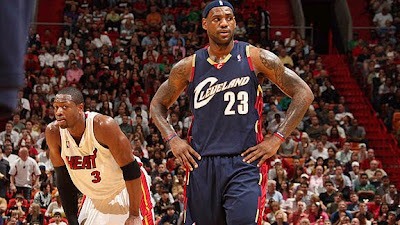 Last night LeBron announced that he'd be joining Dwyane Wade and Chris Bosh in Miami. I think it's half and half -some are really happy while some are extremely upset and no longer support Lebron. He's been playing with The Cavs for 7 years now and people are pissed off about the whole loyalty thing -I get that. However, I feel like if he'd stayed with the Cavs, all it would get him was more losses and no ring -is that even fair to him? I think real (LeBron) fans should root for him to go wherever he can excel in his career -not just stay in his hometown and keep on losing year after year.. but I get why Cleveland fans would be so upset. With his talent, he needs to at least get 1 ring.. at least ONE! Maybe LeBron will actually have a chance now and Miami will put in end to LA and Boston (damn I'm so sick of those 2 teams.) 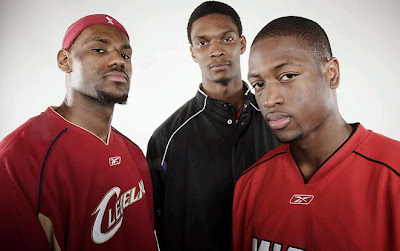 I read that Bosh, Wade, and the rest of the team had to take lesser pay for LeBron to join Miami which I think is total BS but oh well. These guys are already making millions, they don't need more ..including LeBron. Seriously, who really needs $96 million? Another little fun fact, he'll be saving millions on his state income tax because Florida has no state income tax. Smart move? Hmmmm..
Oh and if you're a LeBron, Wade, and Bosh fan -get your tickets ASAP. The Heat's season tickets are already sold out (at least the ones that they put up for sale.) I really want to see them when they come down here.. I really hope the team succeeds. I would've liked LeBron to go to Chicago too but I like D Wade and The Heat so this fit is totally fine with me. Something people are worried about is that because there's a bunch of stars on this one team now, their egos will clash. Miami is Wade's team and now LeBron's moving into his territory!! Ahh whatever.. hopefully they can make the best of it and put all their talents to good use.
My boyfriend just sent me this letter that Dan Gilbert, Cavs owner, sent out to Cleveland fans.
Lebron & Wade pic source
I accidentally lost the link to where I got the last pic but I think it was ESPN??
Posted by kali at 3:10 PM